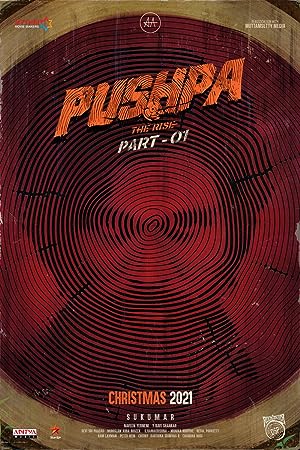 Story of Pushpa Raj, a lorry driver in Seshachalam forests of South India, set in the backdrop of red sandalwood smuggling. Red Sandalwood is endemic to South-Eastern Ghats (mountain range) of India.

Story: Pushpa Raj is a coolie who rises in the world of red sandalwood smuggling. Along the way, he doesn’t shy from making an enemy or two.

Review: With Pushpa: The Rise, Sukumar ventures into unchartered territory by making a rustic masala film filled with punch dialogues, characters that speak in a Chittoor dialect and a story that’s rooted deep in the region it’s set in. And seeing as how expectations were sky-high after Rangasthalam, what he delivers turns out to be a mixed bag that’s over-long, falters at times and delivers what it promises at others.

Pushpa Raj (Allu Arjun) is one of the many coolies in Seshachalam who chop down red sandalwood illegally and sell it by the kilo to powers-that-be. In a syndicate that consists of numerous players, Pushpa slowly learns to find his footing and rise in ranks till the man who would once chop down these trees becomes the one giving the orders. However, his Achilles heel is not his lady love Srivalli (Rashmika Mandanna), or the big-wigs Konda Reddy (Ajay Ghosh), Jolly Reddy (Dhananjay), Mangalam Srinu (Sunil) and his wife Dakshayani (Anasuya Baradwaj).